Indonesian literature for youngsters, since 1998, has been flooded with romance prose dabbed, either with life motivation and religious issues or the more popular chick-lit. This trend still continues. Fortunately, there are some recent developments on the literature scene that have brought a refreshing air of difference. One of these fresh developments is the publication of a number of plays/theater works. An excellent example of this genre is Faiza Mardzoeki’s Nyanyi Sunyi Kembang Kembang Genjer (Bandung: Ultimus, 2016).

In a different genre, poetry books have also gained more adherents in Indonesia in the past two years. It is true that there were some poetry books published earlier, such as Aku Ingin Jadi Peluru (I want to become a bullet), a collection of poems by Wiji Thukul which was first published in 2000 (second printing in 2004). But this is more an exception. Particularly, it is because Wiji Thukul was a well-known poet-activist, whose life story was recently been visualized in a biographical film, Istirahatlah kata-kata (Solo, Solitude) (2016).

Indeed, the situation is changing now. Young Indonesian readers are showing more interest in purchasing poetry books. A number of online poets (in particular, on social media like Facebook) have gathered young followers and their works are being published as books.

Two poetry books are commercially considered as best sellers: Tempat Paling Liar di Muka Bumi and Tidak ada New York Hari ini. It is also worth noting that each of these publications also use illustrations to enhance the mood and made their lines of prose easier to comprehend. Two young professional illustrators, Theizard and Lala Bohang, collaborated to illustrate Tempat Liar Di Muka Bumi, while Muhammad Taufiq/Emte showed intriguing illustrations in There is No New York Today. 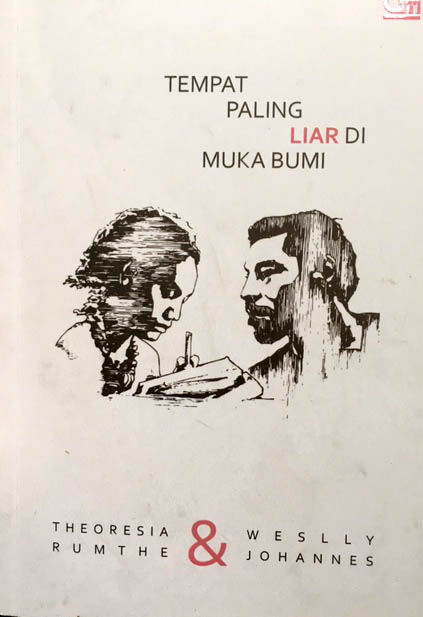 Tempat Paling Liar di Muka Bumi (The Wildest Place on Earth) is a work of collaboration by two young poets, Theoresia Rumthe and Weslly Johannes. Theorise Rumthe was once a radio announcer with professional experience spreading over a decade, who moved to concentrate on writing and offering public speaking and vocal training. She is currently residing in Bandung (West Java). Her short stories are published in two different anthologies: Perkara Mengirm Senja (Jakarta: Serambi, 2012) and Menuju(h) (Jakarta: Gagas Media, 2012).

Wesley Johannes lives in Saumlaki, North East of Maluku (the Molluccas). As a well-known poet and scholar in theology, he actively writes poems describing his hometown. Both Rumthe and Johannes are proud Mollucans, and their poetry book is proof of their affection for their common hometown. Hence, its title refers to the Molluccas, that is, “wildly” beautiful. The pair write about their love and longing due to separation, and the beauty of the Molluccas. As each give their take on each other and their love, the collection offers melodious rhythm of words.

Interestingly, all the poems are set in juxtaposition. Rumthe’s are in recto while Johannes’ are in verso. This style is a reminiscence of the traditional Malay style of reciprocating poems (berbalas pantun). In the tradition, poems (pantun) made up of four-lined verse are exchanged between two parties, and this exchange which could go on all night, forms a dialogue. In this style of reciprocating poems, both Rumthe and Johannes offer numerous excellent dialogues on their common love and longing.

Their lines are also filled with their yearning in daily modern life. Their exchange of words using mobile phones, trapped in traffic jams in on a micro bus are peppered with sea and waves. The Molluccas are, indeed, famous for the picturesque sea. Each poems has its own time stamp, similar to an instant messaging time stamp – a characteristic that young readers could easily relate to in their everyday lives.

Below are excerpts of their poems entitled punggung sepasang kekasih (spines of a pair of lovers):

This feeling wants to cling to (your) back
to feel you from behind!
When the sun shines inside chest,
the burning, grassland tickles feet
About unplanned falls
you and me like a pair of pelicans
explicate our feelings, which blindly wonder”

Sat next to her poem was Johannes’ poem: 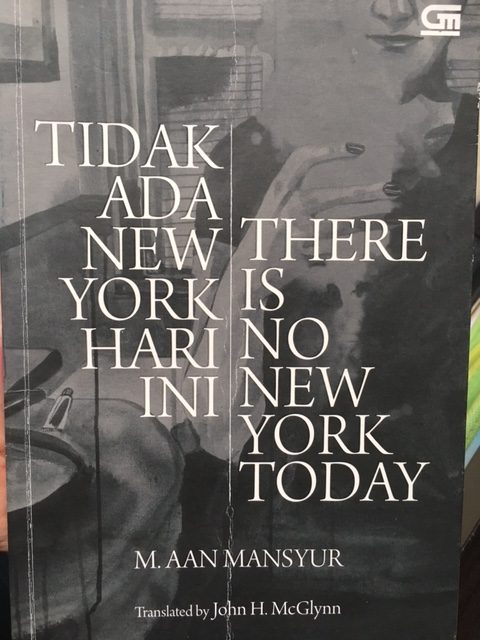 In joining forces with Rumthe and Johannes, Aan Mansyur has come with his Tidak Ada New York Hari ini/ There is no new York Today. This bilingual poetry book is translated into English by John H.McGlynn, a noted editor and translator of Indonesian literature.

Based in Makassar (South Sulawesi), Aan Mansyur also writes prose and essays. His works include an anthology of short stories, Kukila (Jakarta: Gramedia Pustaka Utama, 2012) and a collection of poems, Melihat Api Bekerja (Jakarta: Gramedia Pustaka Utama, 2015). Interestingly, Mansyur’s work was mentioned by the main character in Ada Apa Dengan Cinta 2, an Indonesian movie blockbuster. This has exalted his fame among young Indonesians. Indeed, there are high demands for Mansyur’s poetry books.

Tidak ada New York hari ini describes Mansyur’s solitude and yearning in an edgier tone. Mansyur uniquely cuts his sentences to create an unsetted feeling for his readers. He cites Fernando Pessoa, Mary Oliver, Pablo Neruda and David Foster Wallace to display his wide understanding and nod to other poets’ works. Despite its title, the poems in this collection are not just about New York, but more about longing and time passing. Emte accentuates the work by adding his compelling illustration works with faceless figures.

This poem on preceding time could set as an excellent example:

In Far-away Places There Is No Past

There is no past. Life is the enemy.
You awake to find waiting near your door a day
you’d like to throw away, like that pair of shoes
you wear each day to work. The faces that pass
on the busy street are half alien. Half owned
by a person who sleeps in a city that grows more distant
and ever more hazy from being scoured by bad news.

Imagine if the things that are stored in the mind
only knocked on memory’s door when needed-
like a pizza deliveryman when you’re hungry
and all you have in the kitchen is a pile of dirty dishes.

In far-away places there is no past.
The distance between memory and the future
is the gap between the sea and storm in your chest
that threatens to well over in your eyes.
You never know; today the sky might come out
or a storm will trounce you once again.
You just never know.

The publication of these two poetry books signals a positive change in the literature scene in Indonesia. Poetry books encourage young Indonesians to explore different forms of literature. A space that was once abandoned and almost forgotten is now filled with youthful energy. We shall see how this genre might grow in the coming years.