In December 1953, the Central Committee of the Indochinese Communist Party formally established the Research Committee. This was divided into three separate groups, one for each of the disciplinary divisions: history, geography, and literature. It published Tạp san Nghiên cứu Văn Sử Ðịa (Journal of Literary, Historical and Geographical Research), which appeared for the first time in June 1954. In 1959, the Research Committee was reorganized as the Institute of History and Tạp san Nghiên cứu Lịch sử (Journal of Historical Research) was established. From 1954, historians of the committee and institute published prodigiously. In 1971, the first volume of its new canonical version of the Vietnamese past, Lịch sử Việt Nam (The History of Vietnam), was published. The second volume appeared in 1985. (Trần Huy Liệu et al., Lịch sử Việt Nam, 2 vols. Hanoi: NXB Khoa học Xã hội, 1971, 1985.)

In Postcolonial Vietnam, Patricia Pelley takes the long delay between the establishment of the Research Committee and the production of a new general history as her central problem. She explains the delay primarily through the lengthy and elaborate debates that took place in the journals of the Research Committee and the Institute of History. In the first three chapters, she discusses several of those debates: the periods or stages of the Vietnamese past; Vietnam’s ethnic diversity and relationship between the ethnic majority and minorities; Vietnam’s “national essence”; and the nature of its antiquity. In so doing, she describes the process by which certain important, and now often taken for granted, “facts” about the Vietnamese past were established – for example, that Vietnam is comprised of fifty-four different ethnic groups or that the nation was founded by the first Hùng king in 2879 bce. The book’s final chapter is a reflection on the proliferation of commemorative practices in Vietnam and the displacement of traditional conceptions of time by that of universal, linear time.

Pelley’s discussion succeeds in presenting the rich texture of postcolonial historical debate in Vietnam as historians of the Research Committee and the Institute of History engaged a diverse range of interlocutors: Vietnamese dynastic chronicles; French colonial histories; contemporary southern historical writing; and Marxist works, especially from China and Russia. 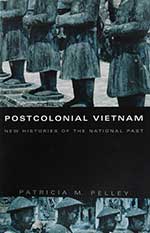 It is to the understanding of Vietnamese Marxism that Postcolonial Vietnam makes an important contribution. Pelley argues that “the meaning of Marxism in any context must be established and not simply assumed” (43). Her discussions of the long debates over slavery, the five stage model of history, and the Asiatic mode of production make clear the “elaborate hybridity of Marxism in Vietnam” (66). Pelley uses the term “Marxish” (9) to describe texts generated by Vietnamese historians in their appropriation and reworking of the writings of Marx, Engels, Lenin, Stalin, and others. “Marxish history” was thus the convention or dominant idiom through which postcolonial Vietnamese historical problems and concerns were expressed, rather than a strictly codified historical doctrine or rigid structure to be applied to the representation of the past.

Marxism and nationalism as doctrines are usually taken to be antithetical. In appropriating Marxism or “Marxish language,” however, the Vietnamese acquired a vocabulary for articulating anti-colonial and subsequently nationalist sentiments. This vocabulary was employed in writing a “new history of the national past.” Such a history presupposed the progression of a unified collective subject, the “Vietnamese nation,” through time. Recent scholarship has revealed how such a unified collective subject is a fictive construct, assembled from diverse fragments. In her discussion, Pelley traces how Vietnam’s fragments, its ethnic minorities (dân tộc thiểu số), became part of a single entity, the “Vietnamese nation” (dân tộc Việt Nam), through various governmental and representational practices. Recent unfortunate events in Vietnam’s central highlands have demonstrated the violence latent in the representations of Vietnam’s minorities.

The politics of representation and the representation of politics are at the center of Postcolonial Vietnam. However, Pelley says little about the politics of being represented. While she examines the political form and implications of certain representations, she does not explore the politics behind the production of those representations. Such investigations might have shed further light on the delay in the production of a general national history. For this, Pelley provides a plausible but insufficient explanation. Neither does she discuss the reception or interpretation of the representations she is concerned with: what was the circulation of the journals published by the Research Committee and Institute of History? Who read those journals and how did they interpret and respond to the representations therein? A possible reason that these questions are left unanswered is that, by her own admission, Pelley seldom goes beyond the official texts that form the substance of her study. This is perhaps the most significant problem with the book.

Another is Pelley’s treatment of certain texts. For example, in discussing the work of colonial-era scholars such as Henri Parmentier, Olov Janse, and Victor Goloubew on the Vietnamese bronze age, Pelley summarizes Charles Higham’s account of their work in The Bronze Age of Southeast Asia (Cambridge: Cambridge University Press, 1996, pp.17-38), rather than reviewing the scholarship herself (148). Higham cites the following texts: H.M. Parmentier, “Anciens tambours de bronze,” Bulletin de l’École Française d’Extreme-Orient (hereafter BEFEO) 18 (1918):18-30; V. Goloubew, “L’Age du bronze au Tonkin et dans le nord-Annam,” BEFEO 29 (1929):1-46; and O.R.T. Janse, The Ancient Dwelling Site of Dong-Son, vol. 3 of Archaeological Research in Indo-China (Cambridge: Harvard University Press, 1958). Since Pelley’s discussion is chiefly concerned with features of the colonial representation of the Vietnamese bronze-age, it is to those colonial representations that she ought to have turned.

Similarly, Pelley discusses the contents of a document that appears in the notes as “Ðề cương văn hóa Việt Nam” [Theses on Vietnamese Culture] (115 and 266, n. 3). The discussion relies upon an account of that document in an article in the Journal of Historical Research (“Nhân dịp kỷ niệm Cách mạng tháng Tám, điểm qua quá trình công tác tư tưởng và văn hoá của Ðảng” [On the occasion of the commemoration of the August Revolution through a survey of the ideological work and culture of the Party] in Tạp san Nghiên cứu Lịch sử 6 [August 1959: 1-10]), rather than on any reference to the document itself. The document is not inaccessible and can be found in the collection Tài liệu Ttham khảo Lịch sử Cách mạng Cận đại Việt Nam [Documents on the History of the Modern Vietnamese Revolution] (Hà Nội: NXB Văn Sử Ðịa, 1957), vol. 10, 90-95. As Pelley’s discussion is concerned with the specific contents of “Ðề cương về văn hóa Việt Nam,” rather than with subsequent representations of those contents, it ought therefore have been made with specific reference to the primary document.

Postcolonial Vietnam is lucidly written and the volume is handsomely typeset. Vietnamese words are rendered in quốc ngữ in the text, rather than in a glossary at the end of the book and the notes are compendious. While the bibliography does not contain translations of Vietnamese titles, most readers who turn to it with any seriousness are likely to possess a reading knowledge of Vietnamese. In this book Patricia Pelley has produced the most comprehensive assessment of postcolonial Vietnamese historiography available in English. Both historians of Vietnam and those interested in perceptions of the past in Southeast Asia will be in her debt.

Haydon L. Cherry
The author is a master’s candidate in the History Department at the National University of Singapore.