Over the past decade, democracy in Southeast Asia, never on firm footing, has faced renewed setbacks. The Thai coup of 2014 inaugurated one of the harshest periods of junta rule in the kingdom in decades. Philippine president Rodrigo Duterte, though popularly elected in 2016, has undermined the Philippine judiciary, cracked down on political opposition and independent media outlets, and unleashed a brutal drug war that has badly damaged civil liberties. In Myanmar, hopes for real democratic progress sparked by the end of military rule in the early 2010s have given way to stagnation, if not regression, as well as massive rights abuses in Rakhine State. Meanwhile, the region’s most authoritarian states, including Laos, Cambodia, Brunei, and Vietnam, show no signs of reform.

In his new short book, The Rise of Sophisticated Authoritariansim, Lee Morgenbesser, a Senior Lecturer at Griffith University in Queensland, offers more grim news about the region’s potential for democratization. He has examined Southeast Asian states including Malaysia, Singapore, Cambodia, Vietnam, and Brunei and four others to provide explanations for why so many of these hybrid or outright authoritarian governments have persisted for so long.  Morgenbesser, who previously wrote the excellent Beyond the Face: Electoral Authoritarianism in Southeast Asia, suggests that the region’s repressive and semi-repressive governments are becoming more skilled, or sophisticated, in how they rule. In recent decades, they have, he says “evolved over time and in a clear direction.” [67] With a few exceptions, they have “increasingly reaped more of the known benefits, dividends, or rewards of authoritarian politics and more fully mimicked the fundamental attributes of democracy.” [67] By doing both at the same time, Southeast Asian regimes, like authoritarians worldwide, are getting better at preventing real political change. 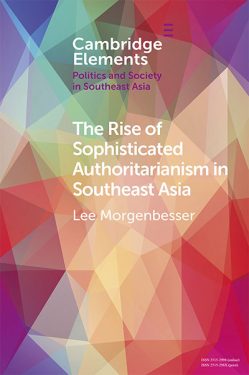 Morgenbesser uses a series of factors to classify authoritarian regimes in Southeast Asia from retrograde to sophisticated, with the sophisticated ones more skilled at co-option and creating democratic facades that diffuse dissent. Retrograde regimes tend to adopt few if any of the attributes of democracy. In the most retrograde, like Brunei – or outside Southeast Asia, places like Eritrea, North Korea, and Turkmenistan – the governments make basically no efforts “to appear anything than full dictatorships,” he writes.  [6] Retrograde regimes have weak or nonexistent constitutions, widespread graft, virtually no civil society, direct and visible propaganda and outright control of information, and blatant intimidation and even murder of opposition figures.

More sophisticated regimes, meanwhile, mimic attributes of democracy, he notes, which allows them to keep control of their populaces through more subtle and indirect means. [6] Among other measures, more sophisticated regimes like Thailand, Malaysia (before 2018), Cambodia, Myanmar,  and Singapore: enact constitutions (and even sometimes deliver on what they vow, like de jure promises to uphold political and civil rights);   combat some types of corruption while insulating the executive from investigation; actually spend money on education and health care and other types of development;  allow some aspects of civil society while also creating government-sponsored NGOs to mimic civil society, [11, 34, 31 ]; tolerate some opposition parties but tilt the playing field to favor ruling parties; hold elections that have a degree of credibility but create vehicles for the government to control the timing of the vote; create essentially fake opposition parties that sit in the legislature and do not challenge the government; and, use their influence over the Internet and social media to spread positive, often false, stories about the government and to undermine and co-opt civil society and opposition parties.

More sophisticated types of autocrats offer some benefits for the population. Sophisticated regimes do combat some types of corruption, offer generally better governance, tend to be less violent in suppressing dissent, and promote genuine development.   But these more sophisticated regimes can last longer — even if they are not, as Morgenbesser notes, a certain final end stage of politics like electoral democracy. The autocracy of retrograde regimes is usually blatant, brutal, easier to perceive, and full of fault lines that provide opportunities for these autocrats to be challenged. Think of the Suharto regime, Thai military governments of the 1950s and 1960s, or the Myanmar junta prior to the 2010s. Their obvious autocracy and regular brutality sparked significant popular pushback, made some of these states into international pariahs, and sometimes even convinced powerful actors within the state to turn against autocratic leaders. (Sometimes, the most retrograde regimes, like Brunei, are able to survive, often because they offer their populations massive largesse derived from oil and gas.)

Sophisticated autocrats, meanwhile, create facades of democracy that create the illusion of popular participation, opposition politics, and civil society while still using less violent and obvious means to control and repress their populaces. These facades divide the political opposition, co-opt some potential regime opponents, win over segments of the population, cow civil society – and yet do not lead to the kind of massive, violent spark, or state-wide corruption, that often brings down retrograde authoritarian regimes.

Indeed, such sophisticated authoritarianism proves harder for reformists to combat, and Morgenbesser believes the increasing skill of Southeast Asian regimes is a prime reason why they have proven so resilient into the 2010s – and, one might add, the 2020s. He notes that, over decades, “every surviving authoritarian regime [he studied in Southeast Asia] has become less retrograde and more sophisticated over time,” even the most closed regimes like Laos and Vietnam. [2] “The familiarity of authoritarian rule in Southeast Asia has tended to obscure its deeper transformation.” [2]

To be sure, regimes do not just become more sophisticated in a straight line. Sometimes they make mistakes and miscalculate. Sometimes, like Cambodia in recent years, they crack down and move toward more retrograde authoritarianism, and at times – like in Singapore – they become genuinely more competitive and freer. Occasionally, as regimes move back toward retrograde authoritarianism, like Malaysia did in the 2010s under Najib tun Razak – Morgenbesser chronicles how Malaysia’s backsliding began shortly after Najib succeeded Abdullah Badawi — they do spark popular mobilization, although Malaysia’s current political situation remains tenuous. [56]

There are, of course, other factors for Southeast Asia’s current democracy regression. Democracy is faltering worldwide, and actors that in the past engaged in prominent democracy promotion, like the United States, have become far less assertive in pushing for rights regionally and globally. The novel coronavirus pandemic has made it easier for illiberal leaders in Southeast Asia, and indeed around the world, to crack down on civil society, opposition politicians, and the press. In the Philippines, the Duterte administration has used the pandemic as a context to pass emergency legislation, including a new anti-terror bill that would allow the authorities to detain virtually anyone, without charges, for a period of time. In Malaysia the pandemic has allowed a new government, which took office without an election, to essentially prevent parliament from sitting for an extended period of time, while also stepping up a crackdown on dissenting voices. Similarly, in Thailand, Cambodia, and Myanmar, governments have used the pandemic to restrict personal freedoms and increase pressure on independent voices.

In addition, China’s increasing influence allows autocrats like Hun Sen to reject pressure from other democracies for real reform, and rely on Chinese aid, investment, and diplomatic support. In the aftermath of the Thai coup of 2014, the junta used the same strategy, mostly ignoring criticism of the putsch by the United States and other democracies and more closely embracing Beijing.

But the broader trend is toward sophisticated and potentially more durable authoritarianism across the region. And given these autocrats’ improving skill sets, the near future for democracy in the region appears as grim as the last few years.