Why has Thailand chronically remained mired in instability, continuously struggling to mediate and adjudicate its political disputes while generally maintaining economic resilience across time? What makes Thailand different than other countries in ways that international observers often find difficult to understand? Which institutions are the referees of Thai society and what has been their history of achievements?  In this book, James Wise, a former Australian diplomat and longtime observer of Thai politics, seeks to answer these questions.

Wise stresses that his work is “an introductory book on Thai politics and the rule of law (back cover)” which is devoid of theory development since he is writing for “the general reader (viii).”Rather, he emphasizes that he simply looks at Thailand’s historical context: “what happened and why (x).” Wise criticizes the “Western-centric perspective” that assumes that Western notions (e.g. democracy) are superior and are the antidotes to Thailand’s needs for development (xviii). But in Thailand, he continues, dispute settlement is different as it depends upon the five referees of monarchy, military, legislature, electorate and judiciary.

In Part 1, “Branches of Government: Historical Introduction,” Wise uses an institutional approach to chronicle the evolution of the Thai state. He centers an initial pre-1932 period of Thai history around the reign of King Chulalongkorn, giving short shrift to regal predecessors. Under Chulalongkorn, the monarchy, executive, military and judiciary—all under the direct power of the king–became part of an absolutist state which dominated the kingdom.

With the 1932 overthrew the absolute monarchy, the weakened institution of monarchy became a mere legitimizer for the “People’s Party.”

By 1938 the military was the dominant institution. This was followed by a brief 1946-1947 interlude in which the legislature and electorate briefly led the country. But with the 1947 putsch, Thailand once again came under the shadow of the military and growing authoritarian rule, a situation which lasted until 1973. By the 1970s, King Bhumipol Adulyadej had brought the monarchy back to being highly influential throughout Thailand. Allied with one military faction, Bhumipol was essential in establishing a 1975-1976 elected government. A 1976 massacre by palace-supported right-wing movements ended Thailand’s democratic experiment, plunging the country back under authoritarianism.

From 1980 until 1988, Thailand possessed a “Premocracy,” an asymmetrical form of power-sharing with the monarchical institution dominant, alongside unelected Prime Minister (and Army General) Prem Tinsulanonda as junior partner, with both above an elected Lower House. This system was followed by a brief elected government.  But the military, chafing at its more limited powers, overthrew democracy in 1991. The coup-borne junta produced a military-dominated, elected government led by army chief General Suchinda Kraprayoon. Demonstrations against Suchinda, brutally repressed by the military, produced intervention by the king and a general election in September 1992. By 1997, civilian-led reform became a pressing issue which contributed to the passage of Thailand’s 1997 constitution.  According to Wise, the new constitution attempted to move Thailand from a five-branch form of government to one prioritizing the power of the executive, legislative and judicial branches (61).

In 2001, populist tycoon Thaksin Shinawatra won a landslide election. His power was undergirded by the institutions of the legislature (which his political party dominated) and the electorate (most of which were his loyal supporters). But he earned the hatred of many in the senior military and the palace when it appeared that he was trying to influence the former and compete with the latter.  In September 2006 the armed forces overthrew him, a coup endorsed by the king. A new 2007 constitution made the Senate half-elected and forced the executive branch to be more accountable to the judiciary. Though a pro-Thaksin government was elected in 2008, the newly empowered Constitutional Court consecutively sacked two pro-Thaksin Prime Ministers, facilitating the accession to office of an anti-Thaksin government.

Then from 2011 until 2013, following the election of another pro-Thaksin government, according to Wise, “each of the five branches of government was equally strong and equally weak (85).” Thus under then-Prime Minister Yingluck there was a brief period of equilibrium. However in 2013 Yingluck’s government introduced a bill that would give amnesty to Thaksin and his opponents for past criminal convictions. The result was six months of violent demonstrations by mostly anti-Thaksin protestors. In May 2014, the military partly used the excuse of such protests as a rationale to stage a coup.  According to Wise, it was not the institutions of the military, the monarchy or the executive that were responsible for the events leading to the 2014 coup.  Instead it was the legislature and the judiciary which unsuccessfully fulfilled their “mediating and arbitrating roles (93).”

From 2014 until 2019, Thailand was under authoritarian rule and the armed forces administered the country, as endorsed by monarchy. A junta-enacted 2017 constitution, to become effective when elected governance returned, strengthened the military, the judiciary and the monarchy. Despite these constitutional changes, Wise doubted that the military would succeed in diluting Thailand’s chronic instability. 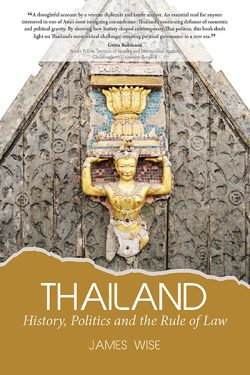 In Part II, “The Heart of Politics,” Wise looks at cultural and ideational factors that undergird Thai politics. He states that Thailand’s king-centered political hierarchy is much more rigid than most Westerners would prefer. Such hierarchy fostered a system of patron-client relations, based upon control over manpower and reliance on personal relations as a means of settling disputes. Patron-client relations can today be found in the bureaucracy, political parties, the legislature, the military, the police, the media, academia, and civil society. Within Thailand there is a “strong state tradition” which is entwined with a “top-down approach (143).”However, the strong state also facilitated corruption.

There exists a deep sense of Thai nationalism and ethnocentrism, sometimes referred to as “Thai-ness,” born partly from a history of hostile relations with outsiders and partly from the fact that Thailand was never colonized.  In many cases Bangkok tried to balance foreign powers off of each other. At the same time, from King Chulalongkorn to his successor King Vachiravudh and to Field Marshal Phibun Songkram, the state increasingly attempted to propagate a campaign of nationalism that would ideationally unite the kingdom together in support of the central government. Though after 1932, monarchy was weakened as a plank of nationalism, it was revived in 1957. The Thai education system as well as the lèse majesté law (insulting monarchy) law both fiercely support the monarch-centered conception of Thai-ness in Thailand today.

In Part III, “The Rule and Role of Law,” Wise compares and contrasts legal concepts in the West with those in Thailand. He first stresses that in the West there is an emphasis on the separation of powers, the independence of the judiciary, and the importance of elected legislatures in establishing new laws. Second, in most of Western culture, this perception of legality is highly valued and uniformly enforced.

In Thailand, though there is an overabundance of laws, social harmony and hierarchy rather than individual rights have been at the heart of all law.  Though legal reforms occurred under King Chulalongkorn, after 1932, continuing changes in the rule of law persisted through the enactment of one constitution after another. According to Wise, until 1997, all of these charters were simply mechanisms of control in the hands of “successive elites (209).”  However, the 1997 constitution sought to enforce individual rights, spelled out a clear separation of powers, and seemed to promote independence for the judiciary.  The military supported putsches of 2006 and 2014 that led to the enactment of constitutions which strengthened the judiciary but also increased the powers of the monarchy and military.  In fact, Wise admits that the judiciary in 2019 “risks becoming a servant of the monarchy and military (2019). While Thailand’s judiciary publicly backs rule of law and litigation, notions such as hierarchy still seem more important in terms of cultural legality.

Ultimately, Wise argues that there are two legitimacies among Thais today.  The traditional legitimacy sees Thailand as existing within a karma-based, palace-centric moral hierarchy.  Meanwhile the modern legitimacy views elections as sacrosanct and sovereignty deriving from the people. While the former currently holds the upper hand, it cannot return the country to the past: democratic discussion has become too important for Thai people.  In addition, the social media is fast closing the disparity between the two legitimacies. Wise concludes that an examination of Thai political history and political culture demonstrates that Thailand will likely have future coups and future constitutions. He stresses that vestiges of the 1997 constitution—the symptom of modern legitimacy–persists in Thailand today while traditional institutions have also shown remarkable durability. The big question is whether the adherents of these two standpoints can ever reach some sort of agreement or will they persevere in continuing acrimony.

This book certainly has its strengths.  First, as a general survey for non-specialized readers about Thailand’s politics, economy and society, it is an excellent. Second, Wise’s historical concentration on the evolution of Thai political institutions a useful approach. Third, he ambitiously argues that before non-Thais criticize Thai political behavior, they should understand that Thailand has had a distinctive cultural-historical path which nevertheless has paralleled successes in economic growth. Fourth, his quoted material at the beginning of each chapter as well as the appendices were a helpful supplement.

However the book can also be criticized. First, Wise mentions five “referees” but excludes bureaucracy from the mix. Then in chapter 4 he suddenly highlights the importance of bureaucracy in spearheading successful state-led development.  Regarding the five, he should more clearly emphasize that the monarchy and military are far above the other “referees” in political standing. Second, Wise makes little mention of the 1946 constitution which was arguably the most democratic in Thai history, especially since the 1997 constitution implicitly maintained monarchy as Thailand’s leading political institution. Third, the book contains factual errors such as when Wise states that “elected civilian government” existed in 1974-1976 (48)—in fact elections occurred in 1975-1976. Fourth, in allocating blame for the 2014 coup, Wise contends that among Thailand’s five principal institutions the legislature and judiciary “played bigger roles in breaking the system” than did the military and monarchy (90). It is difficult to agree with this argument since the military carried out the coup and the monarchy endorsed it.

Despite criticisms (and no book is without criticisms), this book offers a thorough, insightful and generally neutral chronicle of the evolution of Thailand and its political institutions from pre-1932 until today.  As such, it is outstanding and certainly deserves attention from readers interested in how Thailand’s past has influenced its present and possible future.