Southeast Asia is relatively terra incognita for most Koreans, but this does not mean that it has also undone in scholarly research. Scholarly interests on countries in Southeast Asia have been recorded since 1950. Its history is not that short to reflexively trace its footprints and plan for the future.

It consists of ten chapters. It starts with a historical review of Southeast Asian Studies in Korea  and ends with self-reflection by identifying obstacles that constrain its development. The rest of the chapters which form the main part of this book, individually review the history, trends and analysis of studies on nine countries: Indonesia, Vietnam, Thailand, The Philippines, Malaysia, Myanmar, Cambodia and Laos, and on ASEAN community. 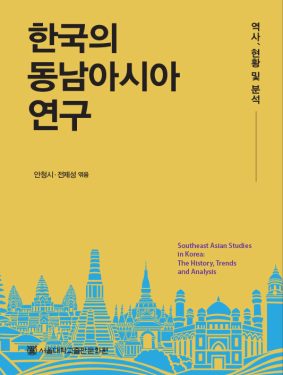 Jeon also points out a distinctive feature of Southeast Asian Studies in Korea is that the two non-university-based organisations have voluntarily led the area studies based on academic solidarity in Southeast Asia. These two organisations have deliberately fostered and supported the next generation of scholars by organising visiting programmes to Southeast Asia, reading groups, field research grants, and seminars. Heevaluates that these efforts have vastly contributed to the development of Southeast Asian Studies in Korea amid the general indifference in university-based postgraduate education.

The following chapters written by country experts address the history, trends and analysis of each country: Indonesia (by Hyung Joon Kim and Je Seong Jeon) , Vietnam (by Han Woo Lee), Thailand (by Hong Koo Kim, Mi Ji Lee), The Philippines (by Bup Mo Jeong), Malaysia (by Hyung Jong Kim), Myanmar (by Yun A Oh), Cambodia and Laos (by Mi Kyung Jeong), ASEAN (by Hyung Jong Kim). These chapters include a brief introduction of the country focusing on its relationship with Korea, lists of theses, books, and statistic analysis on the research trends by reviewing Korean academic journals on Southeast Asia. These chapters also contain a diagnosis of the current problems and suggestions for future research. Notwithstanding the record of studies on countries in Southeast Asia and ASEAN community in the 1950s-60s, these authors consider the 1980s as the start of the full-fledged Southeast Asian Studies in Korea and the 1990s as flourished years with the number of studies increased in the post-Cold war. Except studies on Thailand which have considerable research output in the discipline of literature and linguistics, research on Southeast Asia has been mainly conducted in disciplines of politics and diplomacy, management and economics, and sociology. In this vein, these authors point out the limitation of research diversity and also shed light on the lack of interdisciplinary approach mainly due to the disciplinary separation between literature and linguistics, and social science. The problem of disciplinary segregation is also highlighted in the final chapter, which restates the binary of literature and linguistics and social science and adds that of humanity and social science, and natural science and engineering.

The final chapter, written by Je Seong Jeon, offers a conclusion by restating overlapped tendencies and issues shown in the country chapters and suggesting ‘diversification’ and ‘inclusiveness’ as future strategies. This chapter emphasises the necessity to revisit and rediscover the studies conducted in the 1950s and 1960s, which this book less focused. It requires re-unpacking several historical events (i.e. Asia-Pacific War, the formulation of the nation-state, post-colonial recovery, Indochina Wars, Bandung Conference, Non-Aligned Movement, the formation of ASEAN community and so on), which may help us to understand this period studies as a precedent studies. Jeon also highlights the fact that increasing number of theses written by international students from Southeast Asia countries in Korea. He, therefore, urges Korean academia to appreciate the students’ contribution and embrace them to expand research network.