The November 2011 edition of Indonesia’s leading weekly newsmagazine Tempo highlighted the contributions of Indonesianists to the field of Indonesian studies. These Indonesianists work at Indonesian/ Southeast Asian studies department in various universities and think tanks across four continents (Asia, Australia, Europe, and the United States). The Asian Indonesianists come from China, Japan, Taiwan and South Korea, among others.

According to historian Anthony Reid, out of all academic papers on Indonesian studies published in international scientific journals, 90 percent of them are written by researchers living outside Indonesia. Thus, it shows that Indonesianists have an important role in promoting Indonesian studies.

Oxford University historian Peter Carey is one of those Indonesianists. Carey has consistently studied the history of Java War (1825-1830) and the Diponegoro (1785-1855) rebellion for almost 50 years. He has gained the attention of discerned Indonesian history readers with the publication of his book in 2004, Asal Usul Perang Jawa: Pemberontakan Sepoy dan Raden Saleh (The Origins of the Java War: the Sepoy of 1815 in Java) that chronicles the antecedents of Java War.

He has earned an even bigger audience and widespread reputation when he published his magnum opus The Power of Prophecy: Prince Diponegoro and the End of an Old Order in Java, 1785-1855 in 2007. It is subsequently translated into Indonesian as Kuasa Ramalan: Pangeran Diponegoro dan Akhir Tatanan Jawa 1785-1855 in 2012.

Since then, Carey’s stature as a historian writing the biography of the 19th century Indonesian hero Diponegoro has become known not only among Indonesianists but also people outside the academia, like artists, senior high school teachers, philanthropists, and (Indonesian) government officials.

What is Peter Carey’s most significant contribution to the historiography of Java, especially on Java War? The festschrift Urip Iku Urub (from a Javanese phrase meaning ‘life is flame’) consists of a collection of papers on the subject of his life and works, that may give readers a clue on that.

The fetschrift celebrates Carey’s 70th birthday, but it also marks the 48th anniversary of his gritty foray into the history of Java, which he started in 1970.

The editor, FX Domini Hera, started expressing his interest in Carey’s research studies when he was still an undergraduate student of the history department at the State University of Malang, East Java.

With utter seriousness and dedication, due to his love of historical studies, Hera managed to contact 23 writers across various ages and academic backgrounds – history, philology, the arts, architecture, ship-building engineering and accounting – who are all inspired by Carey’s passionate work.

All the contributors are also unified by a common thread that binds the festschift to  Carey’s works on the Javanese realities, both before and after the Java War. Subject matters include: what did Diponegoro’s descent survive to live in the aftermath of Java War? What happened to the prince’s defeated allies in the post-Java War era, following their exodus from South and Central Java? How did the end of Java War reconfigure the region’s face of Islam? 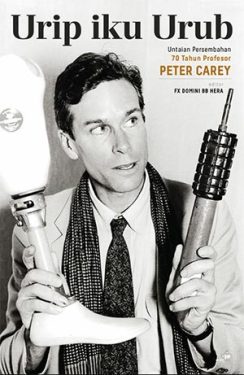 The festschrift is divided into five parts. The first two parts present Carey’s life with personal stories and details. They include a short autobiography written by Carey himself  and testimonies from some close friends. The short autobiography offers a lucid personal account on his ups and downs studying the history of the Javanese society and Diponegoro.

The testimonies, meanwhile, tell the story of Carey’s endeavors in these subjects from the perspectives and personal recollections of his colleagues, including some artists as well as surviving members of the Diponegoro family about their interactions with Carey along with his research about Diponegoro. In sum, these parts provide a biographical context for his work.

The last three parts of the book comprise academic writings on the realities of Java before, during, and after the great war; they discuss the old Javanese order (Part 3), the five-year war that transformed the old order (Part 4) and the aftermath of Java War (Part 5). These parts undoubtedly underline Carey’s contributions to the academic discourses  on the Javanese as a dynamic society transforming itself from the old order to the new one.

In his book Power of Prophecy (2007), Carey firmly states that the Java war is far more complicated that just Diponegoro fighted against the colonists in his efforts to expulse them out of his land. The five-year war had significantly and fundamentally changed the foundations of the Javanese society, prompting a transformation of orders along with the colonial government’s imposition of its modern bureaucracy on the society itself. Interestingly, he provides an interesting description by reading the babad (Javanese chronicles) as a historical source alongside other European sources; showing how Carey strategizes to find a balance between the demands of the empirical reasoning of scientific historical methods and the logic of sense (rasa) of the Javanese society.

With his work, Carey has also reunited the scattered clans of the Diponegoro family – his foremost research subjects. He has also mentored history teachers patiently while being an amicable teacher for many history aficionados and practitioners. True to this festschrift’s title, the history of Carey’s passionate life has become alive, a life flame (urip iku urub).

This review, originally written in Bahasa Indonesia, is translated by S. Partogi.