A Muslim organization in Javanese culture

Muhammadiyah Jawa is an important work written on historical development of Muhammadiyah, an Islamic organization established in 1912. It is written by Najib Burhani – himself is a prominent young Muslim intellectual, based on his Master thesis submitted at Leiden University, The Netherlands, entitled, “The Muhammadiyah’s Attitude to Javanese Culture in 1912-1930”.

In this book, he emphasizes the importance of a socio-cultural lens to renew the meaning of history more comprehensively. With it, he offers a fresh perspective to look into Muhammadiyah beyond its organizational structure, but as a religious ideology that was constructed within the cultural dimensions of Javanese society, particularly during the early decade of its establishment (1912-1927).

Burhani sees Islam as a religious manifestation of local culture with its growth and spread in the local context. In this lens, Muhammadiyah is the representation of Islam with its specific conditions in Yogyakarta at a particular time. He notes that this representation is marked with at least 6 characteristics.

They are: (1) the praxis of Javanese values in the daily life of Muhammadiyah’s leading figures; (2) its publications and communicative actions were mediated through Javanese language, not Arabic; (3) the clothing style of Muhammadiyah members were fashioned as an adaptation of Javanese and Western style; (4) the names of most Muhammadiyah activists were identified with Javanese names; (5) the founding father of Muhammadiyah, KH Ahmad Dahlan, and his early followers were involved in Javanese culture movement, such as Boedi Oetomo; (6) KH Ahmad Dahlan affirmed the basic ideas of inclusivism and pluralism as the significant orientation of Javanese culture. (p. 139)

It is important to note that the perspective Burhani offers here is uncommon, lest to say in contrast, to the thinking of many Indonesian Muslim today. For many Muslim today, especially among some particular groups and communities who declare puritan-conservatism visions in understanding Islam, as well as within Muhammadiyah itself, Islam is always imagined as the purest religion. That is, Islam is without any historical, social and cultural complexities. For these people – now commonly known as Salafism or Wahabism, “Islam is Islam. Anything about Islam must refer to the Qur’an and prophetic tradition or Sunna, textually.” For them, creation and innovation in interpreting both resources are forbidden, because these activities indicated heresy. These problems of the scriptural interpretations also have their roots in the history of Muhammadiyah’s thought throughout decades since 1928 mainly, which marked by the establishment of Majelis Tarjih Muhammadiyah (p. 122; pp. 115-135).

This alone, Burhani’s book offers a controversial understanding of Islam in Indonesia today. Furthermore, it confronts the theological creed of the Salafism/ Wahabism. In their theological worldview, the term Muhammadiyah (which literally means, “followers of Muhammad) contains an explicit meaning to persuade every Muslim to follow the Prophet Muhammad in totality (kaffah). And since Muhammad as the Prophet is an Arab (man), every Muslim must affirm to the dominant cultural character of Islam: Arabism. Every Muslim is expected to be fluent in Arabic, especially for praying, sounding Adhan, and reading the Qur’an and hadith. Therefore, every attempt to reinterpret Muhammadiyah through Javanese point of view, like what Burhani offers in this book, is not allowed. 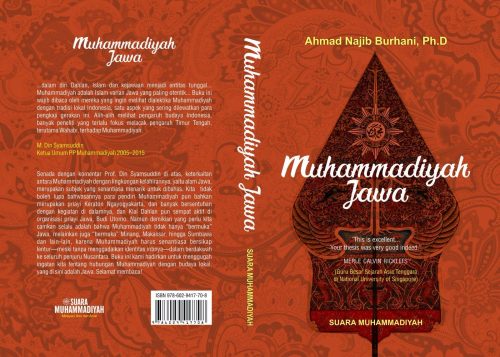 In the broader world, we can relate similar perspective as advocated by prominent scholars like Fazlur Rahman, 1 Tariq Ramadan, 2 and Abdullah Saeed. 3 The main thrust of their reflections highlights the cultural dimension of human beings is inherent with religious understanding, teaching and believers’ behavior. Islam needs to be understood in its historical and socio-political backgrounds so its messages of peace, freedom and equality are relevant for us today.

As a young muslim intellectual in Indonesia today, Burhani has brought an important contribution to this understanding of Islam. In his narration of the history of Muhammadiyah, he uncovers the shifting Muhammadiyah attitudes towards Javanese culture. The dynamic interaction among its members at that time was an important element that made the organization relevant and gained followers.

Thus, Muhammadiyah Jawa not only provides its readers with a wider and deeper insight about the history and ideology of Muhammadiyah but more importantly also, an understanding that Muhammadiyah as a Muslim organization develops and lives within the midst of Javanese culture. It is a representation of Islam in Nusantara.