As recent as two years ago, communism was a dirty word in Malaysia’s political vocabulary. All changed with the publication of Ong Boon Hua’s biography, Alias Chin Peng: My Side of History. The biography broke all sales record in both Singapore and Malaysia, with more than 30,000 copies sold to date. The Chinese version will be out by the end of this year and is expected to sell even more copies than its original English edition.

For most of us here in Sarawak, Chin Peng remains the face of communism in Malaysia.  Yet Sarawak produced two personalities that could easily be the Chin Pengs of Sarawak. At the height of the communist insurrection in Sarawak in the 1960s, the names of Bong Kee Chok and Weng Min Chyan were almost as well known as that of Chin Peng’s.  Yet today, almost everyone anyone under 30 would not have heard of them.

The communist agents were especially active in the Kuching Chung Hua Schools. The two key leaders that emerged from the Chung Hua School who were later pivotal in creating the  Clandestine Communist Organisation (CCO) in Sarawak were Weng Min Chyuan and Bong Kee Chok. Various organisations were formed to recruit students, including the Overseas Young Men’s Association and Sarawak Overseas Chinese Democratic Youth League and later, Sarawak Advanced Youth’s Association (SAYA). Very early on, the leaders from Sarawak tried to establish contacts with communists from the region and China. A high level member was sent from Kuching to establish contact with the MCP but not much came out of the meeting in Singapore.

The CCO was extremely well organised. They had their plans clearly laid out- essentially they want an independent Communist state in Sarawak. They infiltrated the trade unions and covertly took over Sarawak’s earliest political party, the Sarawak United People’s Party. The top leaders of SUPP, Ong Kee Hui and Stephen Yong, may not be CCO sympathisers but below them, almost all the branches were controlled by agents of the CCO. Weng and Bong became founder members of SUPP. Another half a dozen CCO members also joined as founder members.

By this time, the early 1960s, the British Special Branch were well aware of the threat posed by the CCO. The trigger to open hostility occurred in 1962 when AM Azahari launched his ill-fated attempt to take over the Brunei sultanate. Azahari had deep links with the SUPP/CCO and when the military uprising failed just before Christmas 1962, the Special Branch took the opportunity to launch an all out campaign to crack down on the CCO. All the key CCO leaders including Weng and Bong were round up. Many were deported back to China while other were banished deep into the interior. Many SUPP branches were proscribed.  Weng and Bong opted to leave for China.

In the midst of all this, the story became even more complicated when Tunku Abdul Rahman launched his federation plan to incorporated Singapore, Sarawak, Brunei and Sabah into a single political entity. The timing could not be better for the CCO as Sukarno vowed that he would “crush” the federation of Malaysia even before it was formed. The Indonesian became an instant ally of the CCO, providing supplies and training facilities in Kalimantan to the CCO. By this time, Bong and Weng made their way Pontianak and hooked up with Azahari’s supporters who escaped the security net in Brunei and Limbang. The CCO played an important role in Azahari’s exiled army, the Tentera Nasional kalimantan Utara (TNKU). More than a thousand Chinese youth walk the jungle trail across the border to join. They received military training and further indoctrination. It was this group that formed the core of  the Communist guerrilla units, Pasukan Rakyat Kalimantan Utara (PARAKU) and Pasukan Gerilya Rakyat Sarawak (PGRS). They had between 600 to 1000 armed men. The CCO  operated all over the First Division and all over the Rejang Delta and all the way up to Kapit.

However, things began to sour for the CCO when Suharto took power in Indonesia in 1965. Suharto did not trust the Partai Komunis Indonesia (PKI) and launched a killing spree against communists and their supporters in Indonesia. More than half a million were killed. It was just a matter of time before the CCO would be targeted. Suharto’s acceptance of the federation of Malaysia meant that the safe haven CCO enjoyed in Kalimantan disappeared overnight.

On the Sarawak side, the government had instituted the lessons from the emergency in the Peninsula. “New Villages” were created along the Kuching-Serian road to ensure that the Chinese and native farmers were out of reach for the CCO.  Villagers were kept under close supervision and security at night. Previously the CCO had relied on this community for recruits, food and supplies. The Malaysian security forces also became more experienced with cross border raids by the CCO and began to achieve military success. The war of attrition had taken its toll on the CCO.

By 1970, Sarawak had a new coalition government made up of Parti Bumiputera and SUPP with Rahman Yakub as the chief minister. The ‘moderates’ in SUPP were in full control. Stephen Yong was appointed deputy chief minister. The CCO found it harder and harder to operate. The CCO also officially establish the North Kalimantan Communist Party (NKCP) in 1970 with the manifesto written by Bong.

In 1973, Bong Kee Chok wrote a letter to Rahman Yakub, then Sarawak’s chief minister, to ask for talks. A secret meeting was held in Simanggang leading to a memorandum between the Sarawak government and PARAKU on 20 October 1973. To commemorate this event Simanggang was renamed Sri Aman.

The story of course did not end here. While PARAKU may have laid down arms, other comrades especially those in the Rejang Delta were still fighting. The overall chief of the CCO, Weng, living in China since the mid-1960s, was still calling for an armed struggle although he was aware that Bong had signed an agreement with the Sarawak government.

From 1974 onwards, the war of attrition continued mostly in the Rejang Delta. There were killings on both sides and many innocent civilians lost their lives. 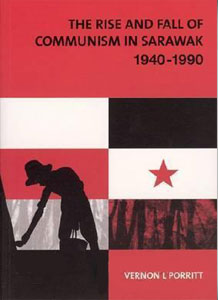 According to Porritt, the catalyst for the ending of the armed struggle was the peace agreement signed between the MCP and the Malaysian government in 1989. Weng, from China, issued instructions that the CCO should also open negotiations with the Sarawak government. A series of negotiations took place in Bintulu in July 1990. On 17 October 1990, a formal peace agreement ending the communist insurrection in Sarawak was signed in Wisma Bapa Malaysia, Kuching. The final group of about 50 guerrilla gave up their armed struggle and Sarawak was finally free of the communist scourge.

Although the author managed to interview Bong Kee Chock for this study, he did not managed to get Weng Min Chyuan, who is, by all accounts, still alive in China. Weng remains the elusive figure in this saga. He was the chairman of the CCO for most of its struggle and yet, for the most part, he was in Beijing trying to direct a battle thousands of miles away using Mao’s thoughts. It is obvious that no complete history of the CCO can be written without Weng’s imput. If Weng is willing to come back to Sarawak, would the government allow him back for a visit?

Due to language limitations, the author also did not consult the various memoirs and personal recollections of several ex-CCO guerrillas published in Chinese. Thus far there are about six separate “memorial” issues published by former CCO associations in Kuching and Sibu. Although these recollections would probably not changed the overall analysis of the book, they may provide a richer context of the struggle. They will also show the extend of support the CCO has in Sarawak Chinese society. The author also appeared not to have approached the Friendship Association established by the ex-CCO members. The Association is still active and hold regular meetings. Porritt’s study would have benefited enormously by talking to the rank and file of the CCO/NKCP.

As it is, Porritt’s account largely relies on the words of the victors, especially the accounts of the former head of the Special Branch, newspaper reports (mostly from Tribune) which reflect official viewpoints, Ong Kee Hui and Stephen Yong, the moderate SUPP leaders who eventually prevailed on the leftists in the party with the help of the Special Branch.

Perhaps the most interesting part of the volume lies at the end where the author gives biographical sketch of some CCO members. By the author’s own admission, the list is incomplete. There are problems with the names. Some of those listed separately are actually the same person. The CCO use of fake names and the romanisation of their Chinese names often leads to confusion. Far more puzzling to this reviewer is the author’s omission of some prominent ex-CCO and their sympathisers who now holds senior government posts (including a state assistant minister) and other prominent political figures. Their background is an open secret and most party members know their identities.  Bong has openly said he is still a member of the SUPP and was never expelled.

The gaps in Porritt’s study mean that there is still a lot of work to do on Sarawak’s hidden history. For example there are still questions left unanswered: Why did Weng never tried to return to Sarawak to lead the movement? Why was Weng not present at the 1990 peace agreement?

Was Weng in contact with Chin Peng? Chin Peng based himself along the Thai-Malaysian border for a long period but Weng appeared to be happily based in Beijing. Why did the CCO not establish links with the MCP? They appeared to have tried in the 1960s but nothing came of it. Was it because of ideological differences or was it on Beijing’s instructions? The links between Beijing and the CCO is also largely unexplored in Porritt’s work.

The CCO managed to recruit some key Iban figures. From Porritt’s account they appeared to play a minor role in the struggle. Yet it is clear that in the Rejang Delta and further upriver, without the convert support of the local Dayak community, the CCO would have been beaten a lot earlier. From Porritt’s account, the main recruitment ground for the Chinese youth was in the Chinese schools. How were the Dayak recruited? And why were they attracted to the communist ideology?

None-the-less, Porritt’s account of the CCO is the best available in the English language so far.  He has done an admirable job writing a period of contemporary Sarawak history that is largely ignored by local historians, and ensured that future generations will have a reference for this important period in Sarawak’s political development. Most younger Sarawakians do not know that there was even a communist insurrection in Sarawak that lasted about than half a century. A deep and comprehensive understanding of our history is essential if we are to retain the unique character of Sarawak. A community that does not know its history is like a community that has no soul.

Better still, one hopes that Bong and Weng will put pen to paper and record their place in history as Chin Peng has done.  Sarawak and the world is ready to accept their side of history.

James Chin
[Associate Professor James Chin is director of the Institute of East Asian Studies, Universiti Malaysia Sarawak.
He can be contacted at jchin@ieas.unimas.my]