Booming sounds break into the lives of people at a food stall in Mandalay. Such jarring noise was unfamiliar and bewildering to the people of the royal capital in the interior of Burma in the 1880s. Rajkumar, however, a poor eleven-year-old Indian boy, recognized it right away: “‘English cannon,’ he said in his fluent but heavily accented Burmese.”

So begins Amitav Ghosh’s novel The Glass Palace. The boy’s words presage the momentous downfall of the Burmese sovereign King Thebaw and the start of an epic tale. Not long after the explosions, British soldiers – mostly Indian sepoys – force the surrender of the Burmese army and march up to the Glass Palace at the center of the King’s complex, “a vast hall that is like a great shaft of light, with crystal walls and mirrored ceilings.” This great hall is looted by British forces, then by Mandalay residents who had until this day held the palace grounds in awe. King Thebaw and his family are captured and exiled to India.

It is during the desecration of the Glass Palace that Rajkumar spies Dolly, a royal household maid who becomes his lifelong love. After the fashion of epic legends and contemporary Bollywood films, they are separated but not before he promises to see her again. From his humble beginnings, Rajkumar, through fortitude and street smarts, rides the crest of the ensuing economic expansion to achieve the heights of success as a timber merchant, simultaneously playing his part in the building of colonial Burma. Years later, his promise to Dolly is fulfilled when he travels to Ratnagiri in India, home of the exiled royal family, to be reunited with his love.

Ghosh’s novel spans vast temporal and spatial dimensions in which people shape and are shaped by larger forces, without ever abandoning the thread of personal ambition, struggle, love, and death that ties the times and places together. Individual effort, material progress, and grand historical transformations move the plot from its Burmese beginnings through cities and sites in India and Malaya. With a remarkable eye for detail, Ghosh describes the material conditions – from the curious ingredients of meals to cutting-edge technologies – that also tie lives together. We learn, for instance, that in the year of King Thebaw’s overthrow, 1885, Karl Benz unveiled the “motorwagon” run by a small internal-combustion engine. This modernizing moment brought the industrialization of Europe to the streets of Mandalay in a conversation about a paper illustration of the vehicle in question.

It is through family networks that the novel is able to achieve its ambitious span in time and space. The family begun in Rangoon by Rajkumar and Dolly is linked by longtime friendships, business, and the lives of their sons Neel and Dinu to the Indian subcontinent and Malaya. The complexities of lives constituted within the ageing British Empire are explored vividly, linking the prewar years to events and chains of significance going back to the Indian Mutiny of 1857 and forward to the retreat of colonialism signalled by the Second World War. Along with the British empire, Rajkumar’s business is brought to ruin and his family struck by tragedy during the war.

The Japanese Imperial Army’s swift takeover of British Malaya and advance on Burma are evocatively rendered through the protagonists’ disrupted lives in Rangoon, Calcutta, and the environs of Sungei Petani, Kedah. The war breaks the empire into parts, sundering connections that depend on sea, road, and rail transportation and ending the lives of several key characters. Rajkumar and Dolly themselves only decide to leave Burma when there is no longer transportation to ferry them away. Rajkumar had been reluctant to leave, despite the rise of anti-Indian politics and the nearing war:

“Yes. But it’s hard, Dolly – it’s hard to think of leaving: Burma has given me everything I have. The boys have grown up here; they’ve never known any other home… despite everything that’s happened recently, I don’t think I could ever love another place in the same way. But if there’s one thing I’ve learned in my life Dolly, it is that there is no certainty about these things. My father was from Chittagong and he ended up in the Arakan; I ended up in Rangoon; you went from Mandalay to Ratnagiri and now you’re here too” (269).

After a tortuous and bleak journey through the mountain passes of northern Burma, the much-older Rajkumar and Dolly are reunited with their Indian in-laws. As the vestigial lines of the families are reunited, new nations are born and the British empire begins to disintegrate.

This novel tells the story of the British empire in Asia, but it embraces this expansive world differently than most. It is a rare and imaginative telling in which the colonized – their life experiences, voices, and formative moments – figure prominently, where so many other tellings put the colonial rulers at the center. Through its historically, culturally, and linguistically located details, The Glass Palace renders the complex response of the colonized to the hurried modernity enforced by the colonizer.

The novel gives gritty substance to the formation of anti-colonial politics and the rise of nationalisms through the experiences, connections, and growth of characters scattered across this corner of Asia. The formation of the British Indian soldier, for example, is inextricably linked to his weapon, vehicle, regiment, associations, class background, and subtle indoctrination. Ultimately, questions are raised about enslavement and individual identity through the curious predicament of an Indian fighting on behalf of Britain. Was such a man free who fought in a tradition of soldiering nurtured over several generations by the British in his own country?  Whose interests did he serve? 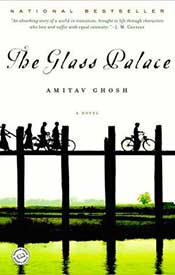 Answers are found in the experiences of the soldiers once they arrive in Malaya, far from the training barracks of Saharanpur in India. “Everything changed in Malaya,” one character says. For the Malaysian reader, the novel evokes the critical turning point in the war that Malaya constituted, showing the formation of Indian national consciousness in one locality as half of the 55,000 British Indian soldiers in Singapore desert to join the Indian National Army. In dissaray after being routed by fleet-footed Japanese troops backed by heavy armory, professional soldiers born and trained in India rapidly embrace their new identity as anti-colonial fighters. They are joined by thousands of Tamil-speaking laborers from the plantations of northern Malaya who had never set foot in India. These workers link the soldiers to the nascent Indian National Army, whose momentum takes off with the entry of the historic figure Subash Chandra Bose. For the workers themselves, India is a “glass palace,” a utopia far from the slave-like conditions suffered in the plantations.

The world of the plantation near Sungei Petani is textured by things Malay and Malayan, details of which are rendered in the Malay language. And while there are a few mistakes in the Malay idiom, it would be petty to dwell upon them, for overall the rich detail and localized sensibilities are well done and evocative. One example is the way Indians and Indian-Burmans, whose lives constitute the fulcrum of the story, are closely linked to the lives of Eurasians, various Indians (Tamils, Punjabis, Bengalis, and so forth), Malays, peranakan or creole Chinese (and the delights of Nonya food), and Chinese, each with their own causes and transnational links referred to in passing.

It could easily (and predictably) be configured in our imaginations that this is a tale of decolonization and the making of new societies in the twentieth century. But the author’s concerns may be further afield. There is a suggestion toward the end of the book that his concern is with people placed and displaced within and beyond the borders of states: how Indians quite naturally became Burman, marrying and loving as any other, and yet how crises of grand proportion made them the object of nationalist revulsion. Indeed, questions about identity are naturally woven into the narrative. Who is “Indian”? Who is “Burman”? And how much are these identities in the hands of the individual and how much in the power of states and larger historical forces.

The story is not singularly Indian-centered and in its telling links the fates of ostracized Indians to the Burmese. Dolly, maid to the last reigning Burmese royal family, is forced to flee her country twice in the story, first at the hands of British invaders and then with her Indian husband. Whether Indian or Burmese, through the dramatic and inescapable tremors of world war and national liberation, people are placed and displaced without a care to their individual character or the lives they lead.

Is this a book about grand events and transformations or the agency of individuals?  Who is right, the son Dinu who is apparently apolitical and maintains a focus on his passion of photography, or his brother-in-law Arjun who begins in the British Indian Army and ends up fighting against it in the Indian National Army? In a telling turn of events, and a sudden shift in focus and narrative, Dinu reappears in Myanmar (Burma of recent times), and here the key question is posed. Is the right kind of politics the one that does not intrude on every aspect of life, as the narrative suggests? The answer, in a fast-forward of Burmese history, is found in the style and person of Aung San Suu Kyi, portrayed as a politician who does not succumb to politics. Here Ghosh may be vexed by how political struggles often pitch people against each other along ideological lines that are much too starkly drawn and even outside the control of individuals. He prefers an oppositional politics that is imaginative, feeling, and complex. Unsurprisingly, the politics of art – of the imagination – is given pride of place among efforts to oppose repression. This may be an uneasy answer, perhaps offered a little too glibly, or at desperation’s end, and much too personalized in the renowned oppositional figure Suu Kyi. Yet the questions asked grip our attention.

In the end, the lives of the primary characters are wrapped up rather too quickly while, unexpectedly, new lives and events emerge. Surprises are in store as the lives of the young and promising end while those of the old and durable prevail. Youth is cut off literally and figuratively, perhaps in order to cast in a bleak light the rise of the new independent states of Burma and India. By the end of the book, whole eras and great experiences have gone by, settling into the distance though remaining pivotal. A few too many novel introductions towards the end of an already long story nevertheless detract from the captivating and interlinked lives already developed.

Reading The Glass Palace at the start of the twenty-first century reminds us how much our lives have been linked by transnational spaces and transformations well before the contemporary preoccupation with notions of globalization. Peoples have moved and been forced to move as a result of European imperialism and nationalism. And peoples have survived and thrived in their various incarnations, absorbing the local and distinctive while cognizant of far-reaching events and people linked to them. I read this book as a means of evoking other Asias. The novel’s region, the eastern British Empire, becomes another Asia, given a life through and beyond colonial-mindedness. It is evocatively rendered as a space within which people, goods, ideas, and so forth flow in distinctive, textured, and dynamic ways.

A piece of painstaking historical work itself, The Glass Palace personifies in gritty and rich narratives the great transformations of the twentieth century in one corner of Asia. It reminds us of our connections with others in the world by reviving the long dormant, even invisible, tremors that have shaped us.

Sumit K. Mandal
The reviewer is Research Fellow at the Institute of Malaysian and International Studies (IKMAS), Universiti Kebangsaan Malaysia.